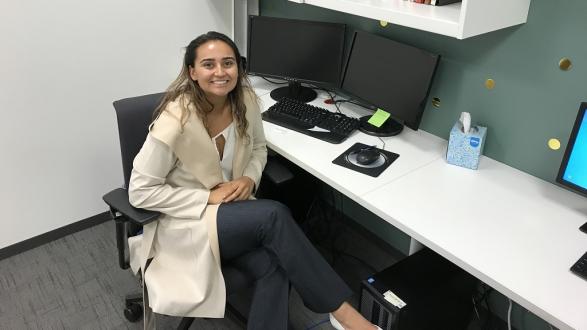 Chandra Ingram is the Spring 2020 Communications Junior Fellow at the Pacific Council. She is currently a senior at the University of Southern California, double majoring in international relations and the global economy and journalism with a pre-law emphasis.

The intersection of her studies aligns with her passion for human rights and social justice. Her interest in domestic and international politics stems from living abroad in India for four years and traveling to over 26 countries on six continents. She has researched the root causes of modern slavery and debt bondage in India and human trafficking, inspiring her to write two novels, Freedom Child and Freedom Lost.

We sat down with Chandra to learn more about her passion for international affairs.

College/University and major: University of Southern California, International Relations and the Global Economy and Journalism

Go-to source for interesting takes on what’s going on in the world: The New York Times, The Economist, Bloomberg, Vox, Vice

Fun fact: I have been to 30 countries, and am currently writing my third book!

Its mission toward international engagement and its unique perspective on LA’s global reach and impact. I am really interested in foreign policy and world conflicts, and want to find an intersection between journalism/communications and politics/international affairs.

When I was eight years old, my family moved to Bangalore, India, and over my four years there we also traveled throughout Asia, Africa, the Middle East, Oceania, and Europe. I learned a lot about human rights injustices and the power governments, NGOs, non-profits, and institutions have in remedying world conflict.

What recent international policy trend(s) do you think is/are important to address and why?

The increasing dangers of climate change and the inaction of world leaders will lead to extreme consequences, including global migrations and refugee crises, health epidemics, and gross human rights violations.

China’s Belt and Road Initiative will create a lot of regional engagement but with strings attached. It will shift the country’s influence in Southeast Asia, the Middle East, and North Africa. Simultaneously, the current U.S. administration has shifted its foreign interests and policies which, to many, signals a potential change in world leadership.

While the United States still holds a global financial hegemony, many states have begun to distrust U.S. leadership. They are slowly moving away from the dollar while building up their reserves with more yen, euros, and other currencies.

In 2019, the wave of protests around the world shows a newfound power in the hands of the people and their ability to organize and successfully overturn both democratically elected leaders and long-term dictators. Other movements are ongoing and still threaten regimes. Additionally, many peaceful movements are reversing policies. These political changes will be important to look out for in the near future. They will influence not only these nations but also their neighbors, partners, and world institutions.