Woman, Life, Freedom: What is Next For the Iranian People? 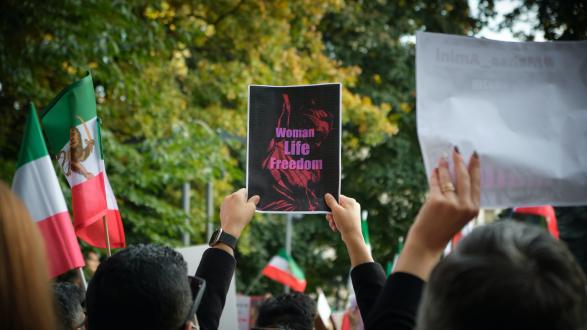 For over two months the Iranian people, led by women, have been protesting for increased rights and the dissolution of Supreme Leader Ayatollah Ali Khamenei regime. This event will examine what we know about the protests so far, the role of women and youth specifically, and ask what comes next both for the Iranian people and the regime. Please join us as Dr. Banafsheh Keynoush and Dr. Jerrold D. Green provide their insight and discuss the latest developments.

Dr. Banafsheh Keynoush is a foreign affairs scholar and an advisor to American private sector companies and policy centers in the Middle East. She has three decades of work experience in high-stake international diplomacy, and in policy and communications roles with the US private sector. She has worked as a development officer at the World Bank and the Asia Foundation. In 2016, she was selected as a Prominent Fletcher Woman by Tufts University. Dr. Keynoush is a frequent speaker in international forums, a political commentator who appears on television and radio, and the author of numerous articles and scholarly publications. In 2011, she was a visiting fellow at the King Faisal Center for Islamic Studies and Research, Saudi Arabia. Her book, Saudi Arabia and Iran: Friends or Foes? was published by Palgrave Macmillan in February 2016. She received her master’s degree and PhD in International Law and Diplomacy at Tufts University, USA.

Antonella Caruso is the Executive Director of Vittorio Dan Segre Foundation. She is the former Director of the Middle East and West Asia division in the Department of Political Affairs of the United Nations in NY (2012-2017). Before joining the UN, she developed and organized a Track II Dialogue on national reconciliation in Iraq, that led to the first caucus on the issue in the Iraqi Parliament (2008-12). She has worked in the private and public sectors in Europe. In France, she collaborated with the Institute Montaigne, a leading independent think tank, and authored the Institute publication “Au nom de l’Islam”, the result of a two year-research project on the institutionalization of Islam in Europe (2005-07). In Switzerland, she was Senior Fellow at the Institute for Mediterranean Studies in Lugano, where she founded and directed the “Incontri del Gottardo” program, a series of high-level meetings on MENA countries. In Italy, she was Senior Middle East adviser to the CEO of ENI (1992-2000) and to the Italian Minister of Foreign Affairs (1988-1992). She has collaborated with the Italian media group L’Espresso and has authored scientific publications on medieval and contemporary Islam.