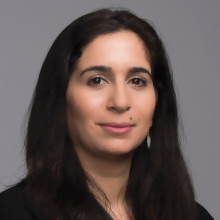 Souad Mekhennet is a national security correspondent for The Washington Post, and she has reported on terrorism for The New York Times and other news organizations.

Born in Germany as the daughter of a Turkish mother and a Moroccan father. As a child she lived in Morocco, before her parents brought her back to Frankfurt.

Since shortly after September 11 she has been reporting about radical Islamic movements. She is a visiting fellow at the Weatherhead Centre at Harvard University, and at the School for Advanced and International Studies (SAIS) at the John Hopkins University, the Geneva Center for Security Policy and The New AMERICA Foundation.

As a member of the investigative unit at The New York Times she covered subjects like war zones, terrorist attacks and the ‘war of terror’, including deportations and human rights abuses.

She was one of two reporters who broke the story of Khaled el Masri’s extradition case and worked on a series called “Inside the Jihad” for which she and her colleagues interviewed members of Al Qaeda, Taliban, ISIS  all over the world.

Currently she works for the Washington Post and German TV channel ZDF.  She has been interviewed for various TV and radio shows in the US, the Middle East, and Europe.

Helping the next generation is one of her other passions, she has taught and lectured at Harvard University, The City University of New York - School of Journalism, as well as at the University of Hamburg and schools and universities in Arab countries.

Souad Mekhennet holds degrees in international relations, political science, sociology, psychology and history from the University of Frankfurt in Germany. She also attended the Henri-Nannen school of journalism in Hamburg and took classes at the City University of New York - School of Journalism.

My Journey Behind the Lines of Jihad