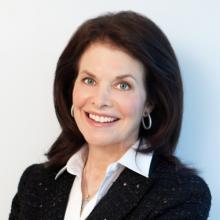 During nearly 30 years in the motion picture business, Sherry Lansing was involved in the production, marketing, and distribution of more than 200 films, including Academy Award winners Forrest Gump, Braveheart, and Titanic. Between 1992 and 2005, she served as Chairman and CEO of Paramount Pictures. In 1980, she became the first woman to head a major film studio when she was appointed President of 20th Century Fox.

In 2005, Sherry created her nonprofit foundation dedicated to cancer research, public education, and encore career opportunities. Among the foundation’s initiatives is the EnCorps STEM Teachers Program, founded by Lansing to retrain career-changers with the technical backgrounds to serve as California public school science and math teachers.

In addition, Lansing is a co-founder of Stand Up To Cancer, which funds multi-institutional cancer research “dream teams.” She also serves on the University of California Board of Regents, and on the boards of the Carter Center, the Entertainment Industry Foundation, the W.M. Keck Foundation, the Lasker Foundation, and Scripps Research Institute.  She has been a member of the Pacific Council since 2013.