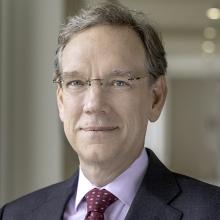 Rob Lovelace currently serves as Co-Chair of the Pacific Council on International Policy's Board of Directors. He is a portfolio manager for the American Funds and President of the New Perspective Fund and New World Fund. He is also Vice Chairman, President and a Director of the Capital Group Companies, CEO of Capital Research and Management Company, a subsidiary of Capital Group, and serves on the Capital Group Companies Management Committee. Rob joined Capital in 1985 after receiving a bachelor’s degree in mineral economics from Princeton University and holds the Chartered Financial Analyst® designation. He is a trustee of the J. Paul Getty Trust, a director of the California Community Foundation, and a director of the U.S. Olympic and Paralympic Foundation. He is also a founder of Vistamar School, a private independent high school in the South Bay region of Los Angeles.