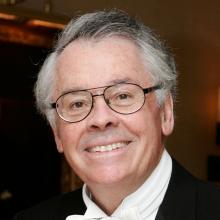 A businessman and public servant with extensive experience in both the private and public sectors, Robert H. Tuttle is co-managing partner of Tuttle-Click Automotive Group, a large retail automotive company.  He was nominated to be U.S. Ambassador to the United Kingdom by President George W. Bush and served as U.S. Ambassador to the Court of St. James’s from 2005 to 2009. Previously, he worked in the White House during the Reagan administration (1982-1989) as an Assistant to the President in 1982, and Director of Presidential Personnel from 1985-1989.  He currently serves on the Board of Directors of the Pacific Council on International Policy (co-chair from 2010-2017), is a member of the Board of the Ronald Reagan Presidential Library Foundation, the USC Annenberg School for Communication, and Freedom House. He was recently selected to become a fellow of The American Academy of Arts and Sciences (2018), and is a member of the Council on Foreign Relations. He is a former Trustee of the Center for the Study of the Presidency and Congress in Washington, D.C. (until 2019), former member of the National Endowment for Democracy, and formerly a trustee of the Los Angeles Museum of Contemporary Art, where he was Chairman from 2001-2004.