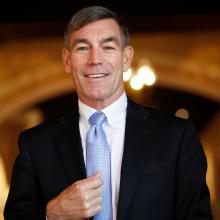 Richard Downie is Managing Director of Delphi Strategic Consulting. He is on the Faculty of the Thayer Leader Development Group at West Point, NY; is a member of the Board of Directors of the World Hwa Rang Do Association--a non-profit martial art; and serves on the Advisory Board for Westport Construction Incorporated.  Following a distinguished career in the US Army, Dr. Downie was Director of the U.S. Department of Defense’s Perry Center for Hemispheric Defense Studies for nine years.

A graduate of the United States Military Academy (USMA) at West Point, he holds a Ph.D. in International Relations from the University of Southern California.  Dr. Downie has appeared on CNN/E, Univision, Telemundo, NPR and other media outlets as a commentator on international security issues. He is a member of the Council on Foreign Relations.