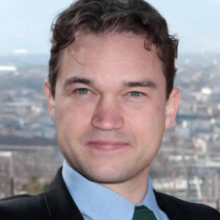 Patrick is the Senior Vice President of the Center for Global Trade & Foreign Investment at the LA Chamber of Commerce. He previously served as Executive Director of the Hunt Institute for Global Competitiveness, part of the University of Texas at El Paso, which produces detailed economic and legal analysis of the various markets that converge in the transboundary, Paso del Norte region. The Institute provides an open platform of regional databases, strategic sector analyses, critical sector mapping, and economic impact models in order to foster greater cohesion among local, regional, and international stakeholders and market actors.

Prior to founding the Institute, Patrick held positions with the World Bank Group and the Inter-American Development Bank in Washington, D.C., where he advised client-states on legal reforms to improve their commercial and financial sectors. In particular, his work centers on the comparative commercial, financial, and natural resource laws within the Ibero-American context, with a special emphasis on Mexico, Spain, Brazil, and Portugal. He received his J.D. from the University of New Mexico School of Law and his LL.M. from the Universidade Católica Portuguesa, where he was a Fulbright Scholar. He has also studied at the Instituto Tecnológico Autónomo de México, the Universidade de São Paulo, the Université Paris 1: Panthéon-Sorbonne, the Hague Academy for International Law, the Katholieke Universitiet Leuven, graduating magna cum laude, and St. John’s College, where he received his undergraduate degree.

His publications have dealt with international bankruptcy and trans-boundary natural resource management. Patrick is also an active member of the Aspen Institute Society of Fellows, the Instituto Mexicano de Ejecutivos de Finanzas, the State Bars of New York and New Mexico, as well as the American Society of International Law.