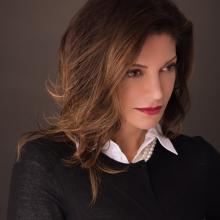 Dr. Nina Ansary is an internationally recognized women's rights advocate, thought leader, scholar, and public speaker. As a UN Women Global Champion for Innovation and Visiting Fellow at the London School of Economics Centre for Women, Peace & Security, she regularly presents her work on women's rights and the impact of institutionalized gender discrimination at major universities and conferences in the US and UK, including Columbia, Oxford, Cambridge, and Harvard, as well as the Carnegie Endowment for International Peace in Washington D.C, the US Senate Human Rights Caucus, and the World Affairs Councils of America.

Dr. Ansary is the author of the upcoming book, Anonymous Is a Woman (Revela Press/March 2020). Her previous book, Jewels of Allah: The Untold Story of Women in Iran garnered multiple awards – including the 2016 International Book Award in “Women’s Issues.”

Dr. Ansary is the recipient of the 2019 Ellis Island Medal of Honor, the 2019 Iranian American Women Foundation (IAWF) Women of Influence Award, and the 2018 Trailblazer Award from Barnard College, Columbia University. She has also been recognized as one of “14 Privileged Women to Change the World” by Marie Claire, been featured in Angeleno Magazine's “Living Legacies of 2016” and selected as one of “Five Iranian Visionaries You Need to Know” and “6 Women Who Build Bridges Not Walls” by The New York Times. Dr. Ansary has appeared on Fox News, Larry King, the BBC, and has been covered in top publications, including CNN.com, Newsweek, the Los Angeles Times, The UK Daily Telegraph, Teen Vogue and the Yale Journal of International Affairs.

Jewels of Allah: The Untold Stories of Women In Iran