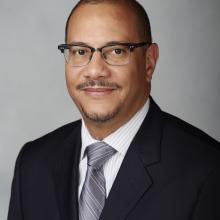 John Valery White is the Ralph Denton Professor of Law at UNLV’s William S. Boyd School of Law.  He was the second Dean of the Boyd School of Law (2007-12) and served as UNLV’s Executive Vice President and Provost (2012-15).  He led the Nevada System of Higher Education as Acting Chancellor in 2016-17.

Professor White joined the Boyd School of Law from LSU where he was the J. Dawson Gasquet Memorial Professor of Law.  His scholarship and teaching focuses on civil rights, human rights, and international law. He was a Distinguished Visiting Professor at the University of Insubria in Como, Italy, where he explored the role of rights protections and multicultural theories in responding to globalism and helped organize a summer program in comparative law. He twice directed the LSU summer program in Lyon, France. Before LSU he was an Orville Schell Fellow at Human Rights Watch in New York City where he investigated prison conditions and human rights practices in Egypt.

John Valery White serves on the Board of Trustees for the Law School Admissions Council (LSAC).  John is Chairman of the Nevada Institute for Autonomous Systems (NIAS), a nonprofit organization dedicated to promoting research on and development of unmanned aircraft systems while protecting privacy and public safety.

John Valery White is a Yale Law School graduate, where he was a Notes and Topics Editor for the Yale Law Journal and participated in the Jerome N. Frank Legal Service Organization.