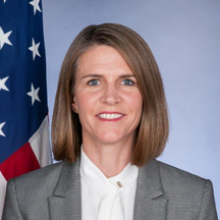 Colleen Bell served as the United States’ Ambassador to Hungary from 2014 to 2017. Prior to her diplomatic service, Ambassador Bell was a leading business executive at an award-winning production company responsible for some of the most-watched television programming in the world, reaching more than 40 million people in more than 100 countries across five continents. While a producer at Bell-Phillip Television Productions in Los Angeles, Ambassador Bell’s work frequently earned the field’s most prestigious recognition for creative content, social awareness, and public-health education. Ambassador Bell’s artistic vision has been recognized for its pioneering impact on the lives of a wide array of marginalized populations in the United States and abroad.

In addition to her long career in international business and the arts, Ambassador Bell is a dedicated philanthropist and an industry-leading advocate committed to tackling some of the United States’ most vexing domestic and global public policy challenges.