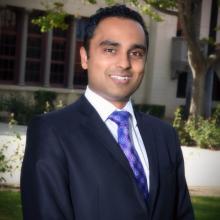 Dr. Angelov Farooq is the owner of AVM Innovation Consulting LLC, a Southern California based economic development firm. He is also the Founding Director of the UC Riverside Center for Economic Development & Innovation.

In 2015, Dr. Farooq was elected to his first term as a Governing Board Member of the Riverside Unified School District (RUSD). RUSD has an operating budget of almost $500 million and governs 48 schools.His project on revitalizing neighborhoods is the subject of a regional PBS documentary called SOS: Sustaining Our Society. Dr. Farooq's work has been profiled by media such as The Huffington Post and the USC Price School of Public Policy. He has been a featured speaker at conferences for a variety of distinguished institutions including the Federal Reserve Bank of San Francisco and the US Department of Housing & Urban Development.

In 2013, Dr. Farooq was appointed by Governor Jerry Brown on the California Workforce Investment Board.In 2015, Dr. Farooq was appointed by California's Chief Financial Officer, Controller Betty Yee, on her Council of Economic Advisors to shape comprehensive tax reform for industries and individuals in the State. Dr. Farooq serves as the Chief Advisor for an economic development initiative (Inland SoCal Link) between the City of Los Angeles and the Counties of Riverside/San Bernardino. The initiative attracts advanced industries, foreign direct investment and the promotion of exports to the region. The project has been designated by the Governor's Office of Business & Economic Development as an Innovation Hub.

Dr. Farooq is a Founding Board Member of ExCITE Technology Incubator. ExCITE is a public-private partnership to foster an innovation ecosystem that conducts technology transfer/commercialization.