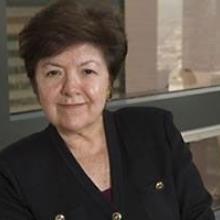 Vilma Martinez has had a distinguished legal career internationally while serving as United States Ambassador to Argentina (2009-2013), nationally as a prominent civil rights attorney as President & General Counsel of the Mexican American Legal Defense and Educational Fund (MALDEF) (1973-1982) and locally in Los Angeles as litigator and partner at Munger Tolles & Olson (1982-2009) and currently as President of the Los Angeles Harbor Commission. She has served on the boards of various major American corporations and community organizations and received numerous honorary degrees and awards. She was the recipient of the Order of May (highest award to a foreign national) presented by the President of Argentina for her work improving mutual understanding and cooperation when she completed her service in 2013. Ambassador Martinez served as a member of The Board of Regents of the University of California (1976-1990) and Chair (1984-1986). A native of San Antonio, Texas, she is a graduate of the University of Texas and Columbia Law School.