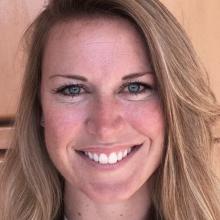 Stacey Nelson, J.D., graduated Loyola Law School with concentrations in international and criminal law. During law school, Stacey served on the Jessup International Moot Court Team, International Human Rights Clinic, Project for the Innocent and as Vice President of her class. Today, Stacey works as a monitor for the Office of Inspector General where she identifies constitutional and other legal issues within the Los Angeles county jail system, among other tasks.

Previous to law school, Stacey graduated with numerous academic and athletic accolades from the University of Florida as well as a degree in Philosophy. Thereafter, she carried on a professional softball career. Stacey played on softball teams in Japan, Italy, Australia, and the USA, including the USA Women's National Team. Stacey still teaches pitching in her free time.

Last, Stacey is interested in international development and job creation for youth in sub-Saharan Africa after living there and studying microfinance and entrepreneurship in 2011. As a continuation of her earlier work, Stacey is currently fundraising to build a bread factory to create jobs for orphans of war and former child soldiers in Pader, Uganda. Stacey hopes that this project will be the impetus for more projects to generate income and stability for residents of Pader.