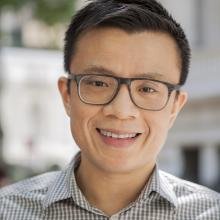 Mr. Chan began his career in 2000 as a staff writer at The Washington Post, reporting on local government, education and social services, and helping to cover the Iraq war. He has also written for The Wall Street Journal and for The Philadelphia Inquirer.

A native New Yorker, Mr. Chan grew up in an immigrant family in Flushing, Queens, and was the first in his family to finish college. He graduated from Harvard with a degree in social studies and received a master’s degree in politics from Oxford, where he studied on a British Marshall scholarship.

Mr. Chan participated in the Rosalynn Carter Fellowships for Mental Health Journalism in 2003-04 and the Marshall Memorial Fellowship, organized by the German Marshall Fund of the United States, in 2012. He served on the National Advisory Board of the Poynter Institute from 2010 to 2013.

Mr. Chan is a member of the Council on Foreign Relations, and serves on the board of incorporators of Harvard Magazine.