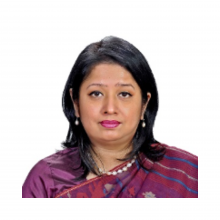 Ms. Samia Anjum has recently been appointed as Consul-General of Bangladesh in Los Angeles, the United States of America.

Prior to serving as the Director-General, Ms. Anjum was posted to the Embassy of Bangladesh in Beijing from 2015-2018 as Counsellor and the Permanent Mission of Bangladesh to the UN in New York from 2011-2015 as First Secretary and then Counsellor.

A member of Bangladesh Civil Service (Foreign Affairs), Ms. Samia Anjum joined the Ministry of Foreign Affairs in 2003.  She served the Ministry in different capacities in the United Nations Wing, Americas and Pacific Wing, West Europe wing, Administration wing and the protocol wing.

She is married and blessed with a daughter.