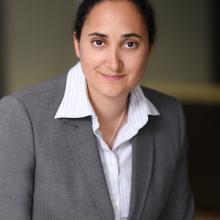 Nahal Kazemi is Senior Counsel at Keller/Anderle LLP, one of Southern California's premier trial boutiques. Her practice areas include business litigation and white collar criminal defense.  In addition, Nahal has extensive experience in advising clients on the Foreign Corrupt Practices Act. She is also an adjunct professor of law at Chapman University.

Nahal is a former Foreign Service Office with the U.S. Department of State.  During her time with the State Department, she worked in international security issues, including countering violent extremism, civil-military relations, and energy and cyber security.  Her overseas postings included Morocco, Iraq, and Hungary.  Nahal has extensive experience working with policy makers from across the federal government, including the Pentagon, National Security Council, Department of Justice, Department of Treasury, and the Centers for Disease Control and Prevention.  She studied at the Naval Command and Staff College, where she received the Foreign Area Officer Association Prize and the Admiral Richard G. Colbert Prize for her written work.  She was a fellow at National Defense University's Program for Emerging Leaders.