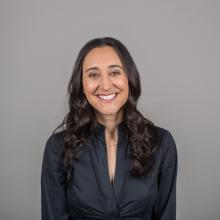 As a native of Los Angeles and avid Rams fan since her childhood, Ms. Camacho is honored to be a part of the Los Angeles Rams organization which has found its way back home.

In her Government Affairs capacity, Ms. Camacho establishes working relationships with public officials and public agencies throughout the Los Angeles region to identify opportunities for partnership and to solicit insight and feedback on current policy and civic topics. Given the development of the new NFL stadium by Rams ownership, to be completed by the 2020 season, she also works closely with the development team in community and public agency outreach and dialogue.

Prior to joining the Los Angeles Rams, Ms. Camacho was Director of External Affairs for River LA for three years, a nonprofit organization working to re-imagine all 51 miles of the Los Angeles River in partnership with renowned architect Frank Gehry. She utilized her 5 ½ year tenure within the Los Angeles public affairs consulting arena as Vice President at Consensus Inc. to initiate a strategic approach to interacting with the political stakeholders made up of 17 cities, the County of Los Angeles and US Army Corps of Engineers, alongside the numerous communities, to carry the river transformation momentum forward.

Ms. Camacho holds her Juris Doctorate from Loyola Law School and Bachelor of Arts in Comparative Studies in Race and Ethnicity with a Minor in Urban Studies from Stanford University. She currently resides in Hancock Park with her husband, Dayton Miller, and her son Landon.