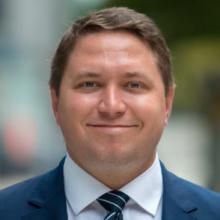 Luke Wenz currently serves as the Deputy National Outreach Director, Western Region for the U.S. Global Leadership Coalition, a broad-based coalition of over 500 businesses and nonprofit organization that works in Washington, D.C., and around the country to strengthen America’s civilian-led tools of development and diplomacy, alongside defense. Luke oversees USGLC’s work across the Western Region of the United States. Prior to joining the U.S. Global Leadership Coalition, Luke served as Deputy District Director for U.S. Congressman Jeff Fortenberry of Nebraska and served as his Campaign Manager. Alongside his work domestically on federal public policy and political work, Luke has lived, worked, and studied in Amman, Jordan, and Beirut, Lebanon. Luke attended Nebraska Wesleyan University, where he studied political theory and the philosophy of religion. Though he travels extensively across the United States for work, Luke is based in Phoenix.