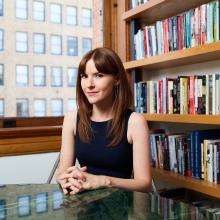 Kathleen Miles is the executive editor of The WorldPost, a partnership of the Berggruen Institute and The Washington Post. She joined The WorldPost a few months after it was founded in 2014 and has helped lead its growth into an award-winning global media platform that has built a reputation for its unique ability to surface foreign voices who make us question or add context to Western narratives about global issues. Now based in Los Angeles, she leads a team of editors in New York, working closely with Washington Post editors in DC, to publish daily op-eds, features and videos from around the world in The Washington Post.

Previously, Miles worked in New York as an editor and reporter for HuffPost, covering politics, business and the environment. Before HuffPost, she was a news producer on Patt Morrison’s daily public radio program at the NPR affiliate KPCC.

Prior to venturing into journalism, Miles was a district representative for Congressman Adam Schiff; English, History and Humanities teacher with Teach for America; field investigator at the National Labor Relations Board; and political action coordinator for the International Ironworkers during the Kerry presidential campaign. She studied international political economy at U.C. Berkeley. She can be reached on Twitter at @mileskathleen.