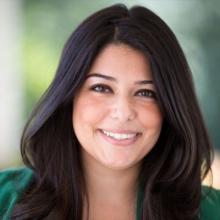 Following President Obama’s historic victory in 2008, Ferial served as a senior member of the Obama-Biden Transition Team, heading up the logistical management of every Cabinet and Senior White House staff interview and position announcement made by the President-Elect. Her first role in the administration was White House Trip Coordinator, from which she was promoted rapidly to Senior Advisor to the Deputy National Security Advisor, playing a major role for almost 4 years in the formulation, operational execution and strategic communications delivery for all Presidential foreign travel, coordination with security advance teams on complex issues surrounding multiple overseas destinations, and liaising with embassies worldwide.

In 2013, Ferial was promoted to Senior Advisor to the Chief of Staff for the NSC, where she traveled globally at the President’s side, acting as point person, primary liaison and gatekeeper for every international trip, employing tactical and diplomatic strategies. Ferial led a team of several hundred staff during the planning and execution of globally high profile events.

Ferial’s last position at the White House was Personal Aide and Special Assistant to President Obama, where she held full accountability for the President’s daily schedule, monitoring all events that would impact or require a response from the Oval Office, managing the intense daily flow of priorities that demanded the President’s time, his interactions with foreign Heads of State, NSC, Domestic Policy Council, and others. She served as a trusted senior advisor and tireless champion of his polices and agenda, at both the executive and legislative level.

Ferial is a graduate of UC-Irvine where she obtained her BA in Political Science. She was the 2016 recipient of the Seton Hall School of Diplomacy Leadership Award, and was recognized by Marie Claire Magazine as one of the Top 50 Most Connected Women in America.