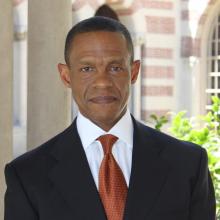 Dr. Erroll G. Southers is a former FBI Special Agent, the Director of Homegrown Violent Extremism Studies in the Safe Communities Institute at the Sol Price School of Public Policy at the University of Southern California (USC). He is also a Professor of the Practice of Governance, the Director of the Safe Communities Institute, and the Director of International Programs for the Department of Homeland Security National Center for Risk and Economic Analysis of Terrorism Events (CREATE). Additionally, he is the Managing Director of Counterterrorism and Infrastructure Protection for the international security consulting firm TAL Global.

Dr. Southers was President Barack Obama’s first nominee for Transportation Security Administration Assistant Secretary and Governor Arnold Schwarzenegger’s Deputy Director for Critical Infrastructure of the California Office of Homeland Security. He served as Assistant Chief of Homeland Security and Intelligence at the Los Angeles World Airports Police Department, police officer and gang investigator with the Santa Monica Police Department and enjoyed the distinction of being a member of FBI SWAT.

Dr. Southers has testified before the full Congressional Committee on Homeland Security as a subject matter expert. As the author of Homegrown Violent Extremism, he is a noted counterterrorism expert and security analyst to a variety of media networks, lectures and consults around the world. He is also a Visiting Fellow and member of the Professional Advisory Board of the International Institute of Counter-Terrorism in Herzliya, Israel and Senior Fellow at the UCLA School of Public Affairs.

At USC, he developed the CREATE Executive Program in Counterterrorism and serves as an adjunct professor of Homeland Security and Public Policy, where he received the 2014 Outstanding Doctoral Project Award and was named the 2013 and 2014 Outstanding Adjunct Professor of the Year.