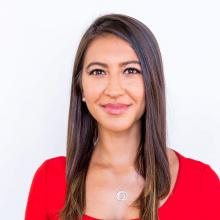 Dulce Vasquez is Director of Strategic Partnerships in the Office of the President at Arizona State University. She is responsible for developing strategic university-wide partnerships, furthering university initiatives, and managing special projects. Through her work she interacts with Fortune 500 companies, think-tanks, and government agencies, and connects them with every level of the university, from athletics to academics.

She was previously the Managing Director of Zócalo Public Square, L.A.’s civic forum. She ran Zócalo’s programming, finances, strategic partnerships, development, and human resources for nine years. During her tenure, she oversaw the planning and executing of over 500 events with ambassadors, authors, politicians, and scientists.

She attended Northwestern University where she was a Gates Millennium Scholar and received a B.A. in political science and philosophy. She also studied at The Institut d’Etudes Politiques de Paris (Sciences Po). While in college, she’s proud of her work on the New Americans Initiative project at the Illinois Coalition for Immigrant and Refugee Rights in Chicago.

In 2011, Dulce was a Boeing Company Fellow at the Southern California Leadership Network and was a 2014 Riordan MBA Fellow at the Anderson School of Management at UCLA. She completed her MPP at the UCLA Luskin School of Public Affairs.

Dulce was born in Tampico, Mexico and immigrated to the US at age seven.