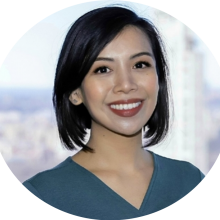 Carmille is Vice President & Managing Director at the Pacific Council on International Policy. In this capacity, Carmille oversees the organization’s emerging modern diplomacy program and ensures the Council’s programmatic activity is in alignment with the organization’s vision, mission, and strategic plan. She is also an independent management consultant specializing in nonprofits and startups.

She previously served as executive director of Common Cause Hawaii, where she successfully lobbied for election day registration and vote-by-mail in Hawaii, and took part in nationwide automatic voter registration campaigns and election protection programs. In this role, Carmille oversaw the creation and implementation of Civic*Celerator, an app that presented campaign finance data in a user-friendly data visualization dashboard, which was a collaborative effort by public policy leaders and software developers in the startup / tech space.

She is a Master of Public Policy graduate from the University of Michigan and is a member of the Junior League of Los Angeles Management Council. Raised in Japan, Hawaii, and Washington, Carmille is a Los Angeles transplant and feels very much at home on the Pacific Ocean.