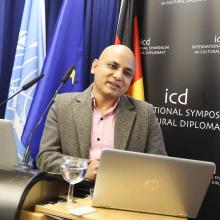 My name is MR. BABURAM ARYAL known as SRIDEV BL in Nepalese film, television and theatre industry. I have been contributing for Nepalese film, television and theatre since last 25 years to till the date. I am doing my best as much as I can do for the betterment of Nepalese theatre, film & television. I have done numbers of theatre plays, films, documentaries and commercial Advertisements. I have my own event organizing and film production company “SRIT FILMS & ENTERTAINMENT (P) LTD”.

Beside this, I have my own Export-Import business “SPEED WORLDWIDE EXPORT IMPORT TRADERS P. LTD.” running since 2008. Board of Director at “Shree Sampanna Saving & Credit Co-operative Ltd.”

In the field of social-welfare, I’m associated with many social organizations, among them, I am serving as Founder President in National Delphic Council Nepal, it is the Nepal Chapter of International Delphic Council which promotes art & culture internationally and its head quarter is in Berlin, Germany. Also I am elected as “General Secretary” in another two organizations from the recent General Assembly “Nepal Volunteer Association (NVA)” & “Option Nepal Human Rights (ONHR)”. Also the Founder Member of Hami Nepali Global, an international society of Nepalese, which is recognized and awarded by the Government of The United States of America, its head quarter is in Connecticut, USA and national chapters opened in 47 countries.